Before you get knee-deep into this endeavor, there are a few general rules you should consider

Are you putting your first demo reel together, or are you looking to update your existing demo reel?

You worked very hard and finally have enough good footage to create, or add to, your demo reel.

But, before you get knee-deep into this endeavor, there are a few general rules you should consider. And, I’d like to emphasize the word “general”, because these rules may not fit each actor’s specific situation.

But I’ve found that they are pretty standard for most acting markets.

A general, industry-wide rule of thumb to remember is that your reel should only be about two minutes long, and no more. Of course, the acting police will not come to arrest you if you break this rule and your reel goes longer than two minutes.

However, what’s the point of having a five-minute-long reel if everyone who views it will stop after the first minute or two? No matter how good you think your demo reel is, the hard truth is that most industry professionals – casting directors, talent agents, talent managers, etc – are usually too busy to look at a long, drawn-out demo reel. So why go longer than two minutes?

If you’ve got some amazing footage and you’d like to include it all on your reel, you go right ahead. Do whatever makes you happy. But just remember, after two minutes, most industry professions will have already turned you off and moved on to their next task.

Here’s a simple rule that should be common sense and easy to remember:

It is mightily foolish to think that your demo reel should have a grand finale. Why? Because, most people will never make it to the finale! That’s why!

Even if your demo reel is short, most industry professions will never keep watching it ‘til the end. A casting director, for example, who has an urgent need to cast a role will be able to see, within the first 10-20 seconds of viewing your reel, whether or not you are right for the role.

So, lead with your best material! Wow them from the moment they click on to watch your reel. First impressions are key! This is similar to the Best-First Rule, but a little broader.

So, your best material should be on display in those crucial 20 seconds.

If you have multiple pieces of footage that you think are great, consider squeezing as much of it into the first 20 seconds as you reasonably can.

Why not? Again, most industry people will not stick around to see all of your demo reel. Why not pack as much great material into the first 20 seconds as you can. Even if that means making the length of your footage shorter than you originally wanted to.

Your demo reel needs to get off to a fast start. Time is of the essence. So, don’t waste your time with:

• An intro, featuring you speaking to the camera

• A fancy montage of all your work

• Music and other introductory footage

Just hit the ground running, so-to-speak, with your demo reel. As soon as someone opens your reel, they should see you, close-up, showing your stuff. Everything else just gets in the way.

You only have a few seconds to “make the sale”. You can’t afford distractions. You can’t afford to waste time. If you must have montages, slates and extra information, consider saving that for the end of your demo reel, instead of the beginning.

5. No-Accent (at the beginning) Rule

Do you do a great accent? Do you think it will be impressive to have it on your demo reel?

That’s great. But remember this rule:

No accents at the beginning of your reel.

To be clear, it’s great that you can do a terrific British or Southern or Boston or Jamaican or whatever accent. It demonstrates that you have training, talent and range. And if you have good footage of you performing your accent(s), you should definitely include it in your reel.

But don’t BEGIN your reel using an accent.

A casting director is quickly going through demo reels. They only want to spend a few seconds looking at your reel. When they open your reel, the very first thing they hear is you speaking in an accent.

Are you sure they’ll spend their precious time wading through your demo reel to see if you can, indeed, speak with an American dialect, free of accents? Are you sure they won’t just get frustrated and move on to the next person?

Perhaps it would work out positively for you. But why take the chance?

All you have to do is follow the No-Accent Rule. Begin your demo reel with footage that demonstrates how you truly speak. After you’ve established your normal speech, it’s time to show off those terrific accents!

Now that you have some general rules to follow, what are you waiting for? 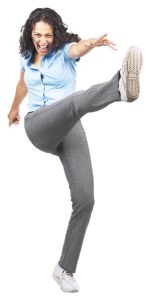 NEXT: Before You Approach an Agent, Get Your S@#t Together!